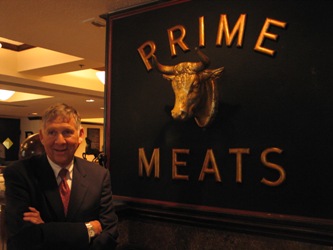 Ben Benson is a New York steak house legend and a very smart businessman.  Talk about personal branding?  Ben and partner Alan Stillman double handedly invented the “singles scene.” Friday’s, on the upper east side of NYC, was the branded place to pick up members of the opposite sex when it first opened.  The bar and its sister bars Tuesdays, Wednesday and Thursdays, which didn’t fair as well, eventually evolved into the TGI Friday’s chain, now with different owners.

Ben and Mr. Stillman parted ways with Mr. Stillman becoming a corporation, a publically traded company (I think) with lots of restaurant properties around the city and country.  Ben stuck to his knitting, stuck to his store (123 West 52nd Street, NYC, “I think you’ll love it.”) and has built a brand the old fashion way: One steak at a time. Mr. Benson, who has had some health problems (Who wouldn’t being surrounded by sirloins all his adult life?) has outlived many peers in the business world. Literally and figuratively.  Thousands of captains of industry who used to dine at Ben Benson’s ordering $400 bottles of wine are long gone and forgotten. Not Ben.

I once told Ben he should give away umbrellas on rainy days to his best guests who had been caught unaware by the weather. (Ben has a wonderful, striking logo.) The umbrellas cost about $19.00 a piece and would be walking billboards around the city I told him. “You know how many steaks I have to sell to pay for one of those umbrellas?” was his response.  “My steaks are expensive — I only make about 2 dollars a steak. I’d have to sell eight steaks to pay for one umbrella.”  The lessons I learned from Ben resound. When I ask clients to spend their money I think of steaks jumping across plates and it grounds me.  Ben is a Harvard Business Review case study. Study him.  (But buy a steak first.)

Steve Poppe - February 3, 2016
0
I had three meetings yesterday in the city (NYC) all of which touched upon the on-demand economy. My first was with a strategist leaving...