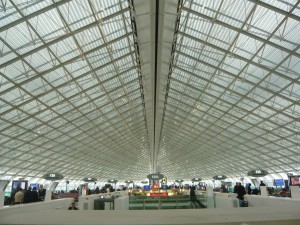 Sounds like something that would take hundreds of millions of Euros to fix. But maybe not.  All big airports are sprawling — they have to be.  Think about it.  Planes can’t take off and land at a good pace without sprawl.  So what needs to change is the organization of that sprawl.  Bewildering is fixable.  Good communication, good signage, ergonomic re-laying out of buildings, better transportation design and a little compromise among the airlines are fixable. Some airlines may have to consolidate space or even switch buildings. The parties need to come together. The interminable waits may require some technology upgrades, even more compromise (unions/competitors/gov’t) and once again better communication.

And, as for forgettable shops and restaurants and indifferent personnel?  If the other fixes are made, these will fall into place.  Remember we are talking about one of the busiest locations in the world…with lots of wallets and lots of income in those wallets. And oh, it’s France. Paris, France.

Before I picked up a shovel or an architect’s rendering, I’d create a brand strategy for Charles de Gaulle: an idea and some organizing principles. Sell that to all parties, then start to think about how to spend the money. Not easy…hard.  But very doable. Peace!

Steve Poppe - July 10, 2020
0
A lot has been written about working from home since the pandemic began. So much so, that it now has its own acronym WFH....