Words To Live Mas By?

A lot of money is going to change hands very soon in the ad industry because of McDonalds rearview mirror planning. Lately, they’ been doing some sideview mirror planning and one could say, with the introduction of salads a few years ago, they were looking beyond the dashboard to the future, but mostly they have looked backwards. Laurels canyon.

Just as Coca-Cola knew a time would come when high-fructose corn syrupy drinks would be seen as unhealthy and share would decline, McDonalds knew a better-for-you-food offering was in the offing. So they introduced salads, made the deep fat fryer less toxic, extended revenue with coffee (an off-piste fix), and reduced the salt on the fries. The freight train was still coming though. All the Millennials you see running around the lake or the park? They are drinking cold pressed juices and Instragram-ing the pics. They’re wi-fing pics of their Mediterranean Veggie sandwiches at Panera. The new generation of fast food buyers is trying to eat better as are their parents.

So while McDonalds was not trying to create a healthier, tastier new burger (veggie?, soy?, buffalo?) or the next branded healthy fast food, other QSRs have taken .2% of same store sales.

The new CMO has done some smart things, no doubt: flattened the organization, faster service, brought in some new ad muscle, but it’s product innovation that is lacking. They will fix it. It is just too bad it took a smack in the nose to wake up. You gots to look beyond the dashboard. Peace.

The Bloated Middle of Marketing. 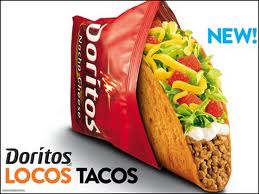 Taco Bell recently sold its 200 millionth Doritos Loco Taco.  They started selling these babies in March.  That’s thinking outside the bun.  From a marketing standpoint.  Not sure whose idea this new product was, but it was marketing genius. For those who think marketing is all about promotion (We need a contest on the website!) or advertising (Let’s hire Barton Graf 9000), this new product launch shows that business building starts with product.

I joked in a Tweet yesterday (@spoppe) that the new product probably resulted from something as simple as someone spilling a bag of Dorito’s in the Yum Brands Test kitchen; the reality is, the idea to merge a Taco Bell taco and a Dorito’s shell was not even that difficult. It was product innovation based on an idea. A simple idea. (I’d be interested to monitor how sales of bags of Dorito’s go over the next few quarters, but that’s a question for a different post.)

200 million anything is a marketing woosh. I love advertising, but all those Dorito’s ads on the Super Bowl the last 10 years and all the think outside the bun and Chihuahua ads in recent memory are orchestrated noise compared to one good product idea.

Any good brand planner knows marketing starts with the product. And it ends with the consumer.  But as an industry we spend too much time in the middle – playing with tactics and ads and “likes” and dashboards.  Let’s get our focus out of the middle and back on the product. Peace!

Not So Happy Meals.

McDonald’s is taking a lot of heat for pushing high calorie, high-fat products to children and promoting them with toys in their Happy Meals.  (Full disclosure, the wifus buys happy meals for the value and portion size.)  Michelle Obama is doing good work in this neighborhood, setting the tone and fighting childhood obesity. We all need to jump on that bandwagon.

Here’s my take. If we can put a TV into a phone, we can probably find a tasty, healthy alternative to french fries, soda, cheese burgers and salt.  McDonald’s answer is to reduce the number of fries in the Happy Meal and add some apple slices.  Have you ever had apple slices in a bag?

So here you go Mickey Ds – get a few chemists in the room, along with some nutritionists, commodity traders and a chef or three and fix this thing.  If anyone can, you can. BTW, I’d love someone to invent a quarter pounder with cheese that doesn’t send my cholesterol all aflutter.  I love that burger but refuse to eat it.

It’s a big planet.  We grow lots of things on this planet.  In the next millennium we’ll engineer food things that grow that are unlike anything we’ve ever seen or eaten before. Healthy things.  Fast food companies that invent and package good tasting healthy food products will be the new clean tech. (Another area in need of leadership.)  Peace! 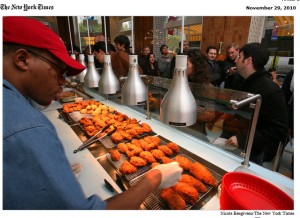 There’s a cool story in today’s New York Times about single-food restaurants. It stands to reason that enterprises of this type can only thrive if the food is excellent and the stores located in highly populated areas.  In NYC you can take out and, in some cases, eat in at a Mac and Cheese store or a meatball store. There are places that sell only mussels, only rice pudding, and only fried chicken. It’s a growing phenomenon. Specialization suggests focus; a focus on quality, ingredients, product and knowledge.

In mid-town Manhattan, where there are probably a half million lunches served within walking distance of any high-rise, there are lots of options. So why not go to the best option; the place that specializes? The place that eats, breathe and sleeps its specialty. Forget me not that this type of store can scale well and have a supply chain with amazingly fat margin opportunities. That’s gravy at the gravy store.

This is a key chapter in the story of the Web — and where the web is going.

We are bound by product and service mediocrity because of geographic and time limitations. And because of supply and demand.  Well, say buh-bye to these barriers.  Ima stop there and let you entrepreneurs ponder that for a while. Ponder, Ponder.  Peace!

The Burger King Whopper is a great product. Many people, myself included, feel it is far superior to McDonald’s Big Mac.  The problem with BK has always been product consistency. One day a Whopper can be sublime – the perfect fast food burger.  Fresh, crunchy, a perfect combination of backyard BBQ, veg. and condiments (the tomatoes are always an issue in the winter), the next day it can be cold, greasy and sporting an almost fruit cocktail-like mush of ingredients.

As a student of Burger King, I thought their investment in new broiler technology a year or so ago was going to change the fast food world. It did not. McDonald’s is still kicking their butt in consistency. Broiling is BK’s point of difference, but it won’t hold up to poor in-store execution.

Today a Brazilian consortium of investors by the name of 3G is likely to make a move on Burger King.  In my view they are buying a business and a brand with so much upside it’s scary. The new owners need to establish almost NASA-like precision, though, with regard to product quality, especially in franchise stores. Forget the advertising for the moment. Forget the children’s playrooms and store color palette.  Get the core product right, make it consistent and the category will turn in your favor. Especially as you roll out internationally. Peace!