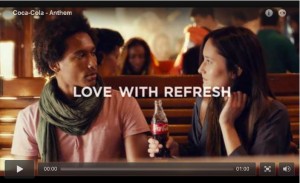 Coke, at the behest of new CMO Marcos de Quinto, has jettisoned “Open Happiness.” It’s a move I applaud. What’s The Idea? readers familiar with my battle cry “Campaigns come and go…a powerful brand idea is indelible” have heard me say ad nauseam that “happiness” is not an endemic, ownable brand idea.

Mr. de Quinto’s new marketing strategy is quite good. Much of his justification for the new campaign is smart. Read the Ad Age story here. The “One Coke” strategy is brilliant in fact. “Sell Cokes not Coke.” Lots of good rationale. Where he goes off track is when it comes to advertising — as is often the case. He bought great advertising. His anthem spot gives one goosebumps; it’s what great anthem ads do. Problem is, it’s “Open Happiness” all over again. This time the line is “Taste The Feeling.” Sure we get a little product feature in there, but taste, even as a verb, is a generic descriptor. And Coke isn’t the best tasting soft drink anyway.

The Coke brand strategy is and ever shall be “refreshment.” I could write great refreshment copy and place it over the anthem spot and sell more Cokes. The marketing framework for the new campaign is strong. The campaign is good ad craft, but it’s built upon the wrong idea.

Coke will have killer numbers this year, thanks to big ad spending and the Rio Summer Olympics – a huge showcase for the campaign. But Mr. de Quinto and his peeps will feel the stasis that comes from good ad craft and poor idea-craft in about a year and a half.

Speak to you then. Peace.

PS. Using 6 ad agencies is also a good accounting ploy, but bad for the idea.

Steve Poppe - June 20, 2007
0
Here’s what Yahoo should do. It needs to become the biggest portal on the Internet. Oh that’s right, it already is. Yahoo has lost its lead in...