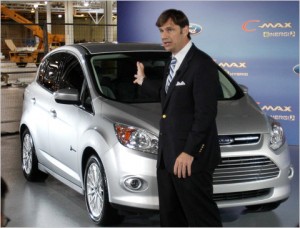 Huevos. Pronounced way-bose.  For my non-Spanish friends that means eggs. It was reported today that Ford Motor Company has decided to drop plans to re-enter the minivan market in the U.S.  Instead, it’s turning a Detroit plant loose building small hybrid cars with the silly name C-Max. Small cars.  Hybrid only.  Let the other knuckleheads build the minivans. Huevos!

My daughter drove from Long Island to Baltimore to see her boyfriend and the EasyPass bill just came in.  It showed about $50 in tolls round trip. Sans gas.  During rush hour, the Long Island Rail Road from Babylon to NYC (about 40 miles) costs $27 round trip.  The gub-ment is charging us healthily for transport.  Why?  Because it’s hemorrhaging money, thanks to bail outs. Who did we not bail out?  Ford. Why? Huevos.

If you follow this blog (Google whatstheidea+Ford or GM), you’ll know that I’ve been ranting about gas guzzlers and large cars for years.  Adapting and adopting are American traits. Pioneering traits.  I Tweeted this morning that as a nation if we put as much collective energy into clean tech and green tech as we put into Anthony’s Wiener, we might actually become the nation of pioneers we once were. Peace!

Steve Poppe - November 22, 2013
0
In my blog I try to not be political.  I save that for Twitter. If my political underwear is showing today, forgive me. I have...