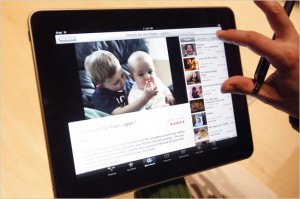 The ads that will adorn the Apple iPad on April 3rd are going to be pretty interesting.  First, if they are good, they’ll be more like selling applications than ads.  Those who create selling apps rather than Adobe InDesign and static display ads (iPads don’t take Flash yet) will have the early wins.

Selling apps that come from ad shops where the creative dept. was the lead (not the media dept.) will also win. That said, brands that team up on the selling app will do even better.  Those who team the objective, strategy, measurement, idea, creative, digital production and follow-up are more likely to have an app than an ad.   But that takes time, resolve and a new process…which is expensive.  Did I mention time?  If you started this week, you’re toast.  The best iPad selling apps won’t be the result of a great piece of “creative” or creative media buy, they will result from cross-silo efforts.

Just being there on April 3rd will be a win for advertisers. There are currently 200,000 pre-orders for iPads. How may of those people do you think have taken the day off? Exactly.  Followers of What’s the Idea? know about Posters vs. Pasters. Well, in terms of the tech target, the first people seeing iPad ads will be Super Posters. Their blog posts, vlogs, podcasts and Tweets will abound. The iPad’s first audiences will be techies and those in creative businesses – a very viral and powerful target. And the world will be watching. Interestingly, the first big brands buying ads will be: Unilever, Toyota, Chase, Fidelity, and FedEx — not what you’d expect as a high indexing techie target. Korean Air, on the other hand, that’s a good fit. Should be very interesting. Peace!

Category Experience Can Be Bull Shite.

Spotlight On Social Media – Today and…

Steve Poppe - April 28, 2010
0
Spotlight on Social Media was held yesterday in NYC, put on by the Participatory Marketing Network (PMN) and Direct Marketing Association (DMA).  There were...