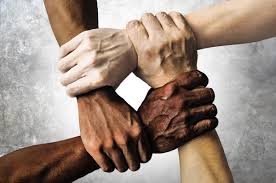 I’ve been working recently with a woman whose reason-for-being is DEI (Diversity, Equity and Inclusion) education. It’s been wonderfully edifying and refreshing. When one wonders what to do to reduce racism in America the answers aren’t easy. Sure, I can look at a picture of 50 white people in a corporate setting and exclaim “White Much?” but that’s me attempting change through humor and doesn’t do much.

Coming out of the advertising business in NY and being married to a woman who worked at the Advertising Council, I believe advertising can be a tool for change when done well. So here is an idea for an anti-racist campaign I’d love to see produced.

There’s a famous historical quote attributed to Edmund Burke, “The only thing necessary for the triumph of evil is for good men to do nothing.”  And good men and women are, weekly, in contact with passive and aggressive statements of racism. I was buying a belt at a leather store last week where an older white women pulled her eyes sideways implying we should keep jobs in America.  (I smiled but left immediately. And I felt dirty for not saying anything.)

Playing off of the “Just say no” anti-drug campaign, launched decades ago by first lady Nancy Reagan, I’d like to suggest a “Just Say Whoa” initiative.  Whenever you hear someone cross the line in conversation, just exclaim “Whoa.”  Teach it in schools. Teach it in office settings. Post it in government buildings. Run it on sports programming. Just Say Whoa. You needn’t say more. Or you can. Up to you.

If you hear something say something.