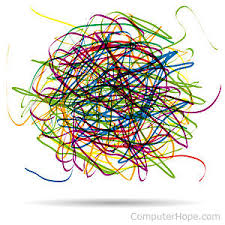 Yesterday I watched a recording of the Cannes presentation by Rob Campbell and Martin Weigel on “Chaos.”  It was lovely and refreshing. Smart men, both. During the Q&A someone asked “Isn’t chaos a lot like disruption?” Indignantly, Rob said “No.” very different, he offered

I’m with Rob, sort of; disruption is so overused. It’s a pop marketing term to which all aspire.  Overall though, I’m not so sure I heard how chaos is that much different when it comes to heightening creativity than are many of the other pop marketing memes planners and creatives have bandied about for years.  Chaos is just a new word for it.

Chaos in practice is recombinant culture, as Faris Yakob might say. Chaos is the mistake that invented Post-It Notes. Chaos is a bird song inspiring “Stairway To Heaven” (I made that up). Chaos it the synapses, synapsing. It’s the irony of disorganization.

I agree with all things said by Messrs. Campbell and Weigel. Be it chaos or some other descriptor. We need to think more creatively about how we think creatively. The clarion call to action they espouse is needed today.

Where I will take issue, however, is the notion of creating chaos in a complete vacuum. Brand building requires that chaotic outputs operate in conjunction with brand strategy. Rob and Martin may not agree. Then again….

Steve Poppe - July 17, 2009
0
Steve Rubel is alike a big fish swimming in the ocean siphoning millions of gallons of water each day for nutrients. For a human,...