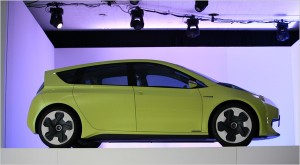 I have been pissing vinegar for years about Detroit’s mishandling of the America car business.  Having recently been on a behemoth cruise ship I can say they aren’t that hard to turn around. (They go pretty fast.)  Back in 2006-2007, I remember reading about the billion dollars losses in De-twah and thinking someone has got to make the tough call and design an energy saving, green tech automobile.  It’s called vision.

Two bankruptcies later, the Detroit Auto Show has finally begun to inch forward. Hybrid penetration is 2% in the states but finally the talk at the show is that the  stand-alone internal-combustion engine’s reign is over.

I met a tech space angel investor last night and asked if he was looking into any deals in green tech.  He said it wasn’t his sweetspot so “not really.”  Well, green tech can’t be too many people’s sweet spot today, but it needs to be.   If this recession has taught us anything, it is that we need to start producing “stuff.”  And green tech stuff is what can lead America out of its current production malaise. I’m no Barack, but as the kids say “like, like, like, like, like duh.”

Detroit will be the initial driver of our green tech revolution, but sadly 5 years too late. Peace!

Steve Poppe - July 30, 2007
0
I’m a newspaper guy; not by trade, by practice. I just love reading newspapers. I love the interface. You can read standing on line, in a...