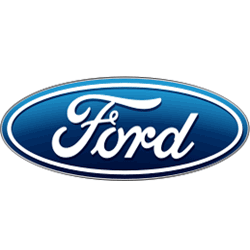 I think it’s time for Ford Motor Company to work on its logo. With the exceptions of three car companies that come to mind, all automobile logos are now simple marks or symbols. Most presented in a round or oval shape. European and Asian car companies started us off down this path and now most all car companies have followed suit.

Ford still has its name in English script letters amidst a blue oval.  If you don’t speak English, you are apt to still recognize the mark, but as the world gets flatter the marketing world needs to respond. In Ford’s case it’s with a new logo.

By my calculation only Dodge and Volvo still rely on their name as logo. Volvo buries its name in a circle and arrow and Dodge uses some other construction with three red stripes, but it’s not on their cars. The way of the future is a single mark, no name.  Ford, on its heels after letting 7 thousand white collar employees go this week, needs an update.  Might as well start with the logo.

I’d love to write the brand strategy and brief for the Ford logo project.  It’s such a rich story. There used to be a saying “As American as Apple Pie.” Chevrolet co-opted that into a commercial “Baseball, hot dogs, apple pie and Chevrolet.”

There are few things in the land of stars and stripes as American as Ford.  Let’s get to work. The world expects better.

Steve Poppe - February 8, 2007
0
Imagine a time in the 1700s when America’s green tea came from a single company with two ships sailing back and forth to China. Following...