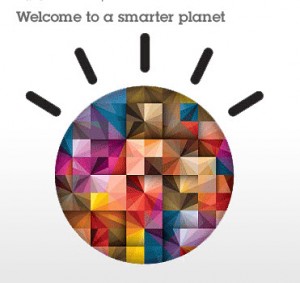 Ogilvy is a great advertising agency.  Always has been.  It loves big ideas, big productions and big brands.  Lately, it has made a name for itself on services companies.  Other than American Express and IBM, I’m not quite sure what accounts they have – which is my bad, but partly theirs.

IBM’s “Solutions for a smarter planet” was a big idea. Already well entrenched with big businesses on the hardware, software and services (consulting) side, IBM decided that rather than grow by increments, it would focus on large-scale advances targeting countries and industries.  That’s some enchilada stuff, there.  “Solutions for a smarter planet” helped IBM take on the planets ills (traffic, energy, food) and showcase some future technology.  By going big, it covered small (corporate) and positioned IBM as vendor of choice for massive overhauls.

Then the economy tanked. And companies started having a difficult time making payroll. And saving the planet lost a bit of luster.  Rather than returning to an advertising idea that supported product and services sales, IBM tasked Ogilvy with keeping revenue up by evolving the idea — the planet will be back at some point (knock wood).  Enter “I’m an IBMer, I’m an IBMer.” For the purposes of continuity (agencies are big on that) the campaign is tagged with “solutions” but focuses on smart employees.  Mistake.  It milks a campaign idea that is no longer the business idea.  Like the Microsoft Bing work that straddled two ideas “information overload” and “decision engine,” IBM is pushing an unclean idea.

Come on Ogilvy, bring on the new work – the new idea. Peace!

Steve Poppe - February 8, 2012
0
Windshield time is a great way to learn from the people who make sales happen -- to travel with sales people and see how...