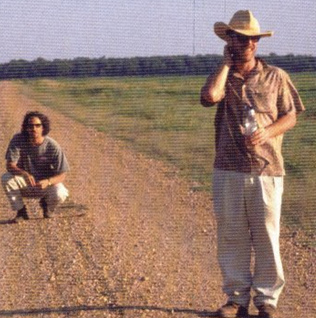 I saw True Grit last night and it moved me.  In a telephone interview with a NYT reporter one of the Coen Brothers (Which is the pretty one? Family joke.) said he didn’t know why the movie had “connected so strongly” with its audience. It’s grossing like a dookie, by the way. The film may be the Coen’s first with a PG-13 rating.

The same don’t know why response is mine when someone asks me why I like the Coen Brothers. It’s hard to articulate.  My pat answer is have you seen “No Country For Old Men”?   That’s one way to sum it up.  After reading the Cormac McCarthy book and loving it, I saw the movie and loved more. And you know that doesn’t happen often. It is just hard to put their craft into words.  Is it pacing?  Dialogue? Art direction, camera work, sound, casting, acting? All that.

Is it realness? Truncated fanfare? Their work has a story; sometimes a beginning middle and end – but not always and it’s not always fulfilling…it’s just raw, thoughtful life.

I first ran into the Coen buzz machine for the first time at the Park City Film Festival (now Sundance) with their launch film Blood Simple.  They became the darlings – and it was a good place to break out.  The dudes are complicated and not for everyone.   But when we look back on film making 200 years out the Coen Brothers brand will, perhaps, be the only one remembered from this era.  Errah Errah.  Peace.

Thoughts on Brand Claims and Taglines.

Steve Poppe - September 8, 2016
0
I used to say "People who talk about ROI aren’t, getting it." Today, I amend to say company "CEOs who talk about shareholder value...