Twitch Point Planning is a communications planning technique I discuss with clients to get them to “understand, map and manipulate” media consumption in a way that moves viewers closer to a sale.  Twitch Points are called such because today’s tools make it way too easy to multitask and twitch away from one media form to another.  Un-planned, this can be a bad thing.  Planned, it is a good thing. 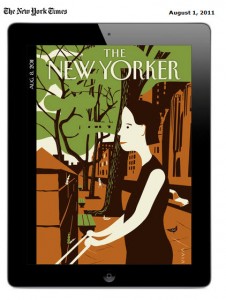 I was reading about Conde Naste’s biggest iPad success today, with The New Yorker magazine. 75,000 paid magazine subscribers have downloaded the iPad app and 20,000 people are subscribing via the app alone. As one looks at the behavior of The New Yorker readers (the first part of understand, map and manipulate) it is clear that these readers are there to read. They don’t want to twitch away to Wikipedia to look up authors, or watch YouTube videos of punk bands inspired by the authors.  Readers of The New Yorker want to read and don’t care to be spammed away. So, here’s an iPad app for New Yorker readers:  automatically send incoming calls to voicemail.  Hee hee. Peace!

Steve Poppe - November 10, 2011
0
Branded Utility has a number of definitions in the marketing world. In my world it is more than simply a branded public service; it’s...