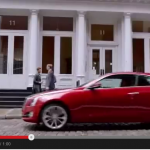 I saw a new Cadillac ad on TV last night.  In light the announcement to move Cadillac corporate headquarters to SOHO, NYC, I was immediately taken by the backdrop of the red luxury car as it rolled through its paces. The streetscapes were def NYC…Greene Street, in particular. As much as the environs were urban and chic, the one thing most in need of style was the car itself. This nondescript Cadillac model was, yawn, nothing to write home about. Save for a few close-ups of the grill emblem, visually there was very little compelling about the ad with the exception of the atypical location.

Cadillac is moving to SOHO in search of style. And cachet. The first thing it needs to do is design some cars that don’t look like white collar dress shoes. I hate to use the words European styling because it suggests we Americans are not style-forward, but a little help from the continent wouldn’t hurt. Or, how about getting some of the Apple designers to lend a hand? The Cadillacs of 2-3 years ago were really, really bad. Now they are just bad.

I applaud the move to SOHO, but nothing is going to change until Cadillac exterior and body designs are smoking hot. The product is everything. Image secondary. Peace.

Steve Poppe - July 10, 2019
0
Yesterday I watched a recording of the Cannes presentation by Rob Campbell and Martin Weigel on “Chaos.”  It was lovely and refreshing. Smart men,...