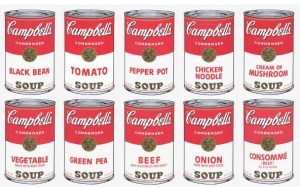 I’ve been a fan of Douglas R. Conant, CEO of the Campbell’s Soup Company, for a few years and today my fanboy status took a hit.  Soup sales fell for Campbell’s in it most recent quarter, missing analyst targets by one cent — and the stock price fell.

In a tight economy, inexpensive soup becomes a staple of the dollar-conscious.  According to reports, people are still buying the condensed soups and using them in meals prepared at home but sale of ready-to-eat and other condensed soups are flagging. Apparently there is just so much canned soup a body can take.

Mr. Conant who is leaving Campbell’s in July, noted that the sales problem is tied to lack of product innovation and the fact that new customers are not stopping by his area of the food aisle.  For a middle-American family of 5 who has eaten soup once or twice a week for a couple of years, pinching dollars, I can see why there might be some push back from around the dinner table.  I suspect a little recipe innovation, rather than product innovation might have been a good idea.

This time last year, when business was cranking,  I reached out to the marketing department at Campbell’s and suggested a creative social media program around a “dinner for dollars” video property. (Can’t say more.)  I was told to take my idea to the suggestion box on the website. As Tony Montana might have said “Not look at chew.”  Peace!

Steve Poppe - August 23, 2010
0
The next big thing will be a video webisodes channel for mobile devices. More and more today, you see people on trains and benches staring...