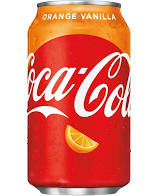 I was at the National Assn. of Convenience Stores (NACs) a few days ago visiting the huge Coca-Cola booth in Atlanta Company, Coke’s home town, and walked among lots of samples and displays, scores of employees dispensing drinks and marketing information, and one big, glaring void.

If you have been watching TV the last 9 months or so you have likely seen a high energy TV spot where a Coke truck is racing around a city, along with a vanilla ice cream truck and a farm truck filled with oranges. They recklessly, in 70s Mod Squad fashion, crash into one another delivering a can of Orange Vanilla Cole to a traffic cop.

The spot must have been supported by $20 million dollar in media since it broke and a million in production at the very least. The spot is still running.

When I asked a marketing person at the booth if I might try an Orange Vanilla Coke, there was a good deal of head scratching. After a few chats with associates, a marketing manager said “good call out,” which I’m assuming meant good catch.

The fountain dispensers were immaculate. The carpet spotless. Signage and booth design perfect. The handsome young men and women were well-quaffed. And the bottle, can and fountain flavors well organized. But the $25 million plus new product launch, was not there.

Steve Poppe - May 8, 2013
0
Coca-Cola, one of the world’s great marketers, is in a category under attack.  I love the brand but don’t love what it does to consumers...