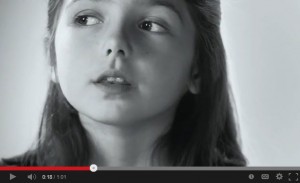 A couple of friends in the ad business, Peter Rabot and Orson Munn, used to do some of the best hospital TV ads in the country.  Their campaign for NY Presbyterian anchored to the line “Amazing things are happening here ” are Spielberg-esque…probably better.  If you were in the business and saw one of these black and white, close-up first person stories of NY patients, including one with Mayor Ed Koch, you stopped talking and watched. If you were not in the business you did the same.

It was advertising that made you feel something then do something.

I understanding NY Pres. was not perfect client to work with (Who is?) and Munn Rabot has taken its craft and moved on.  They now work with NYU Langone.  NYU likes print ads which are harder to do well, especially in this category.  And especially without an idea.  I haven’t seen the idea from NYU yet, but it’s coming.

Having Munn Rabot do a generic awards ad or clinical practice ad in print sans idea is like asking a goldfish to “sit.”  That’s what’s happening now. The agency and client have only worked together for a month or so; they are in that getting to know one another stage.  Let’s hope they land on a brand idea and that the hospital allows the agency to do what it does better than anyone else. These guys are specialists. Artists. Patients don’t argue with their surgeons.

The work will tell the story. Peace.

A Tale of Two Launches.

Steve Poppe - November 22, 2013
0
In my blog I try to not be political.  I save that for Twitter. If my political underwear is showing today, forgive me. I have...