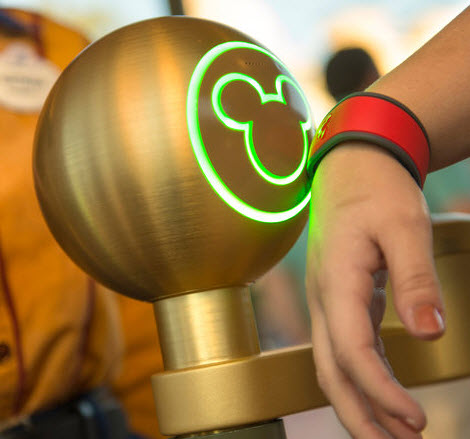 There’s a story today on the cover of The New York Times Business Section on Disney World’s launch of wearable technology intended to improve vacationers’ experience in the park.  It is a wonderful commercial idea. Using a wrist band, not dissimilar from a FitBit or Lance Armstrong bracelet, this puppy will port to your credit card, have geolocation, personal information (“Cinderella says Hello Steve”), and, of course, the ability to track lost children. Limitless are the apps and advantages for this piece of wearable tech.

ScholarChip smart cards were just sold into Baltimore County schools for security, attendance taking, visitor managment and a few other things. The ultimate promise of these cards is to improve student learning. Not many of those apps are available yet, but they’re coming – married to evolving “individualized learning” pedagogy.  Today smart cards have to pass by a reader. So 2010, but a good start. Wearable is so in that future.

At Dizzy World it looks like readers are also needed though anyone can see the future is about ambient wireless readers. Disney World is investing $1B in this technology and though it is probably going to go all Healthcare.org for a couple of months, is an amazing test case for the future.  (Think of the marketing implication people.)

If I did a TED Talk.