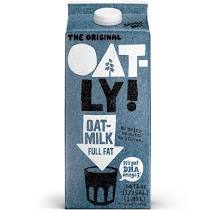 I’ve been following Oatly for a while.  Not long ago it was a hot, topical oat milk company.  Based in Malmo Sweden, it has great distribution in the states. In fact, Oatly cartons are all over my High Five coffee shop here in Asheville.

Oatly IPOed, hired a smart chief creative officer and ran what was arguably one of the better TV commercial on the 20121 Super Bowl — at least in terms of watchability. Sadly, Oatly stock has languished around $4 for the better part of this year, far from its high $28 in the early days.

So what’s wrong?  Smart people at Oatly are asking that same question, yet nothing seems to be happening. Certainly not on the stock front. Or brand front.

Oatly once couldn’t keep up with demand. Now, it says it has fallen prey to a poor economy.  Oatly had a brand that captivated.  That is no longer the case. It became a commodity according to some pundits.  I don’t believe that. Strong brands cannot be commoditized. They have valued meaning. Just because the company is on its heels does not mean it cannot capture the world’s attention again.

I cannot figure out the company brand strategy and I study these things.  So, if I don’t know what it is, consumers certainly won’t.  Oatly will make a comeback. Or they won’t. But if the former they need a brand strategy to wrap around their products. And they had better start quickly. The world’s turning…

Selling In 30 Seconds or Less.

Steve Poppe - June 7, 2016
0
Brand strategy is all about playing offense.  The organizing principle behind brand strategy (1 claim, 3 proof planks), which drives product, experience and message is designed to...