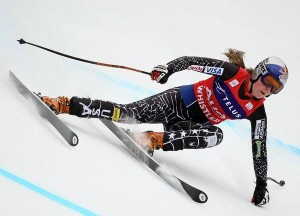 Here’s one of my favorite song lyrics. It’s from the rawness that is David Allan Coe:

The old man was covered in tattoos and scars;
He got some in prison and others in bars.
The rest, he got workin’ on old junk cars…
In the daytime.

I was reading the paper paper today and noticed a nice big Rolex ad featuring Lindsey Vonn skiing.  She is not covered in tattoos but might as well have been.  Here are some of her sponsors: Red Bull, Spyder Thinsulate, Nature Valley, Charles Schwab, Audi, Visa, Sprint and Alka Seltzer Plus — and that’s just on the front of her racing suit. She also represents Head skis, I believe, but they’re on her feet and hard to see.

I tweeted a couple of weeks ago before the Olympics that someone smart should pick up Lindsey and sponsor her. Within an hour someone from Red Bull (good job monitoring, btw) responded that they were her sponsor. Red Bull has done a better job than some with Lindsey – they own her helmet – but the reality is much of their stuff is still tattoo-like.  As Bob Gilbreath says in his good book The Next Evolution of Marketing (better known as Marketing with Meaning), tattooed logos aren’t particularly meaningful.  The reason I didn’t know Ms. Vonn had sponsors was because no one had really pushed their brand idea into her being.

I read somewhere that the Red Bull branding idea has something to do with “flying.” Can’t tell from their website.  And if I can’t spot a brand idea, there probably isn’t one. Sponsors need to understand themselves before they can create a meaningful and promotable relationship with a spokesperson. They need to know their idea. Peace!

Steve Poppe - March 11, 2016
0
Patagonia is a clothing company with one of the biggest hearts on the planet. It certainly wears its heart on its sleeve. But the...