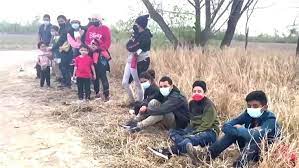 According to The New York Times Sunday President Biden has decided to ask Homeland Security and NASA employees to take paid leave from their organizations and go down to the southern border to help minister to the thousands of children crossing the border seeking asylum. Finally, a smart and workable solution to handling the huge influx. Problem is, he is asking rather than telling. It may be the kindler gentler approach to ask, yet in times of crisis we need fast and decisive moves.

In the 1990s while working as an ad agency guy on the AT&T account, AT&T faced a government regulation requiring them to allocate a proportion of corporate 800 numbers to MCI and Sprint. Until that time, AT&T owned all 800s and was viewed as a monopoly. If you chose to stay with A&T, though, you could.

The president of the Business Communications Services group, Joe Nacchio, emptied two huge corporate buildings in New Jersey of his white-collar work force and sent them on the road to meet with 800 service customers large and small in an effort to get them to stay. Talk about a redeployed workforce! He didn’t ask. He told. It was an unmitigated success. If memory serves, they retained about 90% of their 800 business and margins probably increased as MCI and Sprint were discounters. As an added bonus, they picked up quite a bit of market intelligence for their efforts.

Moral of the story, think big. Be big. Lead decisively.

Leadership During The Pandemic.

Steve Poppe - October 14, 2011
0
I often think about leadership.  Understanding how to lead is a marketing fundamental. A life fundamental. Impressionable junior high schoolers watch what the cool kid...