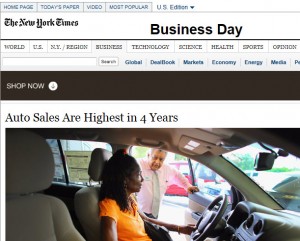 Car sales were reported yesterday and they were quite good.  Year over year for the month of September there was a 13% increase.  The New York Times lead story in the business section announced “the best results in 4 years.”  I’ve been blogging about the automobile industry since the beginning of What’s the Idea? mostly because I’ve been so angered by what’s been happening.

People need cars.  People need money. People need to be more responsible to the planet.  These observations drive my points of view.

I have a suggestion for the auto industry, especially GM and Ford the two companies that performed most poorly. Spin off your truck divisions. Divest completely. They need their own leaders, R&D (design with a capital D), manufacturing and marketing. Most times when there is a divestiture it’s government encouraged.  But time it should be market driven.

My second suggestion relates to advertising. Volkswagen, Kia and Audi are doing good work. The brands themselves are strong enough (4Ps-wise) to allow for advertising to work. The marketing officers and executive teams of these companies are on board with investing and pushing ad boundaries. Using good ad shops. (So is Chrysler.)

During the bail-out meetings a couple of years ago, in the picture of with Ford and GM executives sitting around the table with president Obama, had not a smart phone was to be seen. The Q-Tips were running the show (insider car target reference).  We need to drop the leash here too. Peace.

Steve Poppe - July 25, 2014
0
Thanks to its car ignition problems, General Motors is recalling 29 million automobiles worldwide. If you’ve ever scanned the price of an auto repair...