LinkedIn sent me a survey yesterday which I gladly filled out. LinkedIn is one of the coolest tools on the web. Reid Hoffman, Jeff Weiner and team have uncovered a gem of a portal. No, they engineered a gem of a portal. I said gladly filled out the survey because as much as I like LinkedIn, it’s not perfect. Who is? I get more spam from LinkedIn than any other web provider. Even after turning off lots of things in preferences. The whole endorsements feature is a sham. They should have bulked up recoomendations.  People endorse like errant laps dogs. It’s a glorified like button. 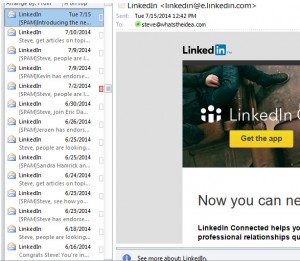 The newish content creation scheme is also annoying. Articles from so-called opinion leaders and influencers appear above the fold, crowding out the people I know and want to keep tabs on. I understand what motives the influencer articles and the endorsement features; they are engagement builders. That’s said, portals with a finely tuned idea who overdo it, who search for extra ad dollars by adding functionality beyond their mission are on a slick slope.

I believe LinkedIn is aware of this and now taking stock. Unless, of course, they’re researching ideas that will lead them further down the feature-creep path. Hopefully it’s the former. My heart and business sense tell me so.

Steve Poppe - June 1, 2009
0
The adgorithm is the new breed of online advertising that is driven by statistics rather than media and creative professionals.  The adgorithm allows testing of...