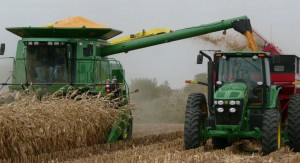 I think it’s time for Microsoft to go into harvest mode.  Harvest is a B- school term that identifies the last part of a company’s lifecycle.  It occurs when companies stop investing and planting seeds and simply harvest what they can while idling down.

There’s still lots of money to be made on PC operating systems and productivity software, so reap those rewards and stop wasting the profits.  Do it for shareholders.

What was the last Microsoft product or service that broke new ground?  It seems every new thing they launch has been invented before.  Yesterday’s announcement of the new operation system for mobile phones, Windows Phone 7, was a little bit late to market, no?  Like 2 years late.

There was a time when Microsoft was the shizz.  Big, powerful, filled with the smartest people in the business.  Sadly, like the punk rock band that became famous, fat and less angry, I fear Microsoft has lost its mojo.  It still has more money than G O D and, so, sustains…plodding along innovating OPS (other people’s stuff).

Microsoft, is looking through the rear view mirror.  Come on Microsoft, shake it up right now or harvest and move on. Peace!

PS. Steven Ballmer quote on Windows Phone 7, “We focused in on how real people really want to use phones when they are on the go.”  With this type of thinking how can Microsoft miss? JKJK.

PPS.  Having done some more homework on MSFT, I’m open to the idea that maybe Window Phone as a mobile OS might actually be a pretty big thing. Maybe there is some bait cutting going on after all.

Words to live by… not promote.

Steve Poppe - August 20, 2015
0
I saw a kid walking in a store yesterday wearing an athletic tee-shirt proudly displaying three words on the back: Pride, Integrity, Respect. Oh boy. Whenever I see...